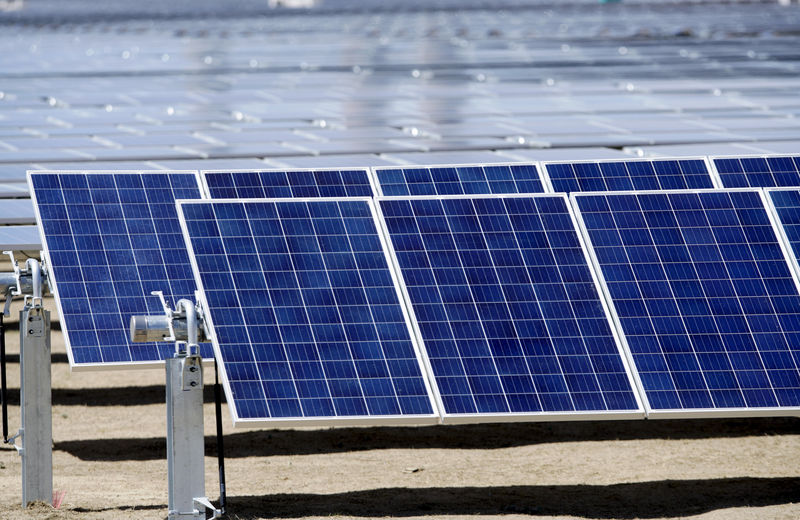 That’s more than double the about $1 billion in new spending plans announced by firms building or expanding U.S. solar panel factories to take advantage of the tax on imports.

The tariff’s bifurcated impact on the solar industry underscores how protectionist trade measures almost invariably hurt one or more domestic industries for every one they shield from foreign competition. Trump’s steel and aluminum tariffs, for instance, have hurt manufacturers of U.S. farm equipment made with steel, such as tractors and grain bins, along with the farmers buying them at higher prices.

White House officials did not respond to a request for comment.

Trump announced the tariff in January over protests from most of the solar industry that the move would chill one of America’s fastest-growing sectors.

Solar developers completed utility-scale installations costing a total of $6.8 billion last year, according to the Solar Energy Industries Association. Those investments were driven by U.S. tax incentives and the falling costs of imported panels, mostly from China, which together made solar power competitive with natural gas and coal.

The U.S. solar industry employs more than 250,000 people – about three times more than the coal industry – with about 40 percent of those people in installation and 20 percent in manufacturing, according to the U.S. Energy Information Administration.

Officials at Suniva – a Chinese-owned, U.S.-based solar panel manufacturer whose bankruptcy prompted the Trump administration to consider a tariff – did not respond to requests for comment.

Companies with domestic panel factories are divided on the policy. Solar giant SunPower Corp (O: SPWR) opposes the tariff that will help its U.S. panel factories because it will also hurt its domestic installation and development business, along with its overseas manufacturing operations.

“There could be substantially more employment without a tariff,” said Chief Executive Tom Werner.

The 30 percent tariff is scheduled to last four years, decreasing by 5 percent per year during that time. Solar developers say the levy will initially raise the cost of major installations by 10 percent.

Leading utility-scale developer Cypress Creek Renewables LLC said it had been forced to cancel or freeze $1.5 billion in projects – mostly in the Carolinas, Texas and Colorado – because the tariff raised costs beyond the level where it could compete, spokesman Jeff McKay said.

That amounted to about 150 projects at various stages of development that would have employed three thousand or more workers during installation, he said. The projects accounted for a fifth of the company’s overall pipeline.

Developer Southern Current has made similar decisions on about $1 billion of projects, mainly in South Carolina, said Bret Sowers, the company’s vice president of development and strategy.

“Either you make the decision to default or you bite the bullet and you make less money,” Sowers said.

Neither Cypress Creek nor Southern Current would disclose exactly which projects they intend to cancel. They said those details could help their competitors and make it harder to pursue those projects if they become financially viable later.

Both are among a group of solar developers that have asked trade officials to exclude panels used in their utility-scale projects from the tariffs. The office of the U.S. Trade Representative said it is still evaluating the requests.

Other companies are having similar problems.

Scott Canada, senior vice president of renewable energy at solar project builder McCarthy Building Companies, said his company had planned to employ about 1,200 people on solar projects this year but slashed that number by half because of the tariff.

Pine Gate, meanwhile, will complete about half of the 400 megawatts of solar installations it had planned this year and has ditched plans to hire 30 permanent employees, Hanes said.

The company also withdrew an 80-megawatt project that would have cost up to $150 million from consideration in a bidding process held by Southern Co (N: SO) utility Georgia Power. It pulled the proposal late last year when it learned the Trump administration was contemplating the tariff.

“It was just not feasible,” Hanes said.

For some developers, the tariff has meant abandoning nascent markets in the American heartland that last year posted the strongest growth in installations. That growth was concentrated in states where voters supported Trump in the 2016 presidential election.

Other developers are forging ahead, keen to take advantage of the remaining years of a 30-percent federal tax credit for the solar installation that is scheduled to start phasing out in 2020.

Some firms saw the tariff coming and stockpiled panels before Trump’s announcement. 174 Power Global, the development arm of Korea’s Hanwha warehoused 190 megawatts of solar panels at the end of last year for a Texas project that broke ground in January.

The company is paying more for panels for two Nevada projects that start operating this year and next but is moving forward on construction, according to Larry Greene, who heads the firm’s development in the U.S. West.

Intersect Power, a developer that cut a deal last year with Austin Energy to provide low-cost power to the Texas capital city, is also pushing ahead, said CEO Sheldon Kimber. But the tariff is forcing delays in buying solar panels.

The 150-megawatt project is due to start producing power in 2020. Waiting until the last minute to purchase modules will allow the company to take advantage of the tariff’s 5-percent annual reductions, he said.

‘A LOT OF ROBOTS’

Trump’s tariff has boosted the domestic manufacturing sector as intended, which over time could significantly raise U.S. panel production and reduce prices.

Panel manufacturers First Solar (O: FSLR) and JinkoSolar (N: JKS), for example, have announced plans to spend $800 million on projects to increase panel construction in the United States since the tariff, creating about 700 new jobs in Ohio and Florida. Just last week, Korea’s Hanwha Q CELLS (O:HQCL) joined them, saying it will open a solar module factory in Georgia next year, though it did not detail job creation.

SunPower Corp, meanwhile, purchased U.S. manufacturer SolarWorld’s Oregon factory after the tariff was announced, saving that facility’s 280 jobs. The company said it plans to hire more people at the plant to expand operations, without specifying how many.

But SunPower has also said it must cut up to 250 jobs in other parts of its organization because of the tariffs.

Heliene – a Canadian company in the process of opening a U.S. facility capable of producing 150 megawatts worth of panels per year – said it will employ between 130 and 140 workers in Minnesota.

“The factories are highly automated,” said Martin Pochtaruk, president of Heliene. “You don’t employ too many humans. There are a lot of robots.”